A Memoir of Resistance and Survival in the Holocaust

Only 2 left in stock

As a teenage Jew in Nazi–occupied Poland, Henry Gribou went to great lengths to conceal his true identity. Fluent in German and Polish, he acquired papers with a fake Polish birth certificate and became a master of slipping unobtrusively between the Jewish and non–Jewish worlds. In this chronicle of his remarkable double life, Gribou recounts his complicated relationship with the Nazi chemist who became his mentor, his parents’ death from German bombs, his efforts to smuggle food to his sister inside the Warsaw ghetto, his life and fledgling career as a chemist outside the ghetto walls, his involvement in the Polish Underground, and his marriage to a local girl who remained ignorant of his secret until after the war. Throughout, Gribou powerfully conveys his anxiety at being exposed at any moment, offering a vivid portrait of a man hiding in plain sight and an extraordinary perspective on the Holocaust. 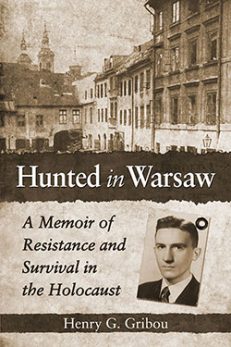