View cart “George Gordienko” has been added to your cart.

George Gordienko (1928–2002) may be the greatest wrestler you’ve never heard of. From humble, Ukrainian/Cossack immigrant roots in the Canadian Prairies, he endured a tough childhood during the Great Depression to emerge as a leading “shooter” and one-of-a-kind artist on the mat. Excluded from wrestling in the United States during the McCarthy era because of his association with the Communist Party as a young man, he was deprived of a run for the NWA World Heavyweight Championship, for which he was hand-picked by the great Lou Thesz. After retirement, Gordienko transitioned to a different sort of canvas and became a successful painter. This first full-length biography traces his remarkable career.

Steven Verrier has previously written works of short drama, fiction, and nonfiction published in the United States, Canada, and Japan. He lives in Bonney Lake, Washington.

• “George Gordienko may never be truly celebrated for his achievements as his life and career fail to fit into a single box that so often defines one’s greatness. Yes, he was a phenomenal wrestler, but also an accomplished artist, world traveler and a gentleman. At so many points in this book, you feel like George had reached the pinnacle—arrived at success to which so many aspire—only to be surprised with the next pursuit and complete mastery that resulted in further successes. There is no single honor high enough to acknowledge the lifetime contribution of George to sports, arts and culture.”—Vance Nevada, author, Wrestling in the Canadian West

• “George Gordienko’s name is spoken in awed whispers among veteran professional wrestlers and those familiar with the history of ‘shooting,’ or the competitive side of the professional art. Until now, however, most of his life was a mystery. Finally, Steve Verrier lifts the veil on Gordienko in a way that deftly illuminates both the man and the world he lived in.”—C. Nathan Hatton, PhD, author, Thrashing Seasons: Sporting Culture in Manitoba and the Genesis of Prairie Wrestling

• “I always knew there was more to the [Gordienko] story, more to explore; I wanted to do a proper biography on him …. Fortunately, Steve Verrier has capably taken up that task.”—Greg Oliver, Producer, Slam Wrestling, and coauthor of The Pro Wrestling Hall of Fame series 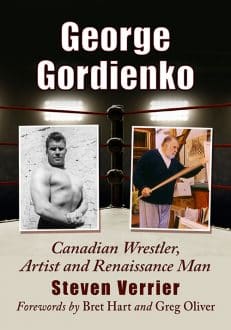