View cart “Gay Novels of Britain, Ireland and the Commonwealth, 1881–1981” has been added to your cart.

While American gay fiction has received considerable scholarly attention, little has been given to developments in other English–speaking countries. This survey catalogs 254 novels and novellas by some 173 British, Irish and Commonwealth authors in which gay and bisexual male characters play a major role. Arranged chronologically from the appearance of the first gay protagonist in 1881, to works from the onset of the AIDS epidemic in 1981, in-depth entries discuss each book’s publication history, plot and significance for the construct of gay identity, along with a brief biography of its author. Including iconic works like Oscar Wilde’s The Picture of Dorian Gray (1890) and E.M. Forster’s Maurice, as well as lesser known but noteworthy novels such as Rose Macaulay’s The Lee Shore (1912) and John Broderick’s The Waking of Willie Ryan (1969), this volume—the first of its kind—enlarges our understanding of the development of gay fiction and provides an essential reading list.

Drewey Wayne Gunn is a professor emeritus of English at Texas A&M University–Kingsville. He is the author, editor or translator of twelve previous books, including two Lambda Literary Award finalists.

A Library Journal Best Reference. Finalist—ALA Outstanding Reference Source
“elegant and thought provoking…recommended for readers interested in the fantasy genre, as well as those who wish to learn more about literary criticism and pop culture”—Library Journal; “stands as a formidable achievement, an unmatched archaeology of the many tentative steps, overlooked one-offs, and even transformative fledgling efforts in gay male fiction. It is a pleasure to read and will fully reward any reader’s investment. Gunn’s books is a wonderful summary of the byways as well as the highways of a century’s non–American but Anglophone gay male fiction”—The Gay & Lesbian Review; “this is the first compilation of its kind”—ProtoView. 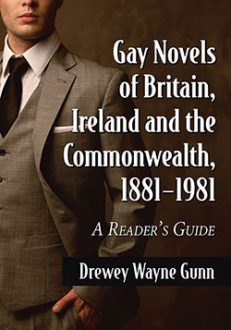