View cart “Free Agency and Competitive Balance in Baseball” has been added to your cart.

As early as the 1880s, baseball owners and sportswriters were decrying the greediness of players as the leading threat to the national pastime. Nearly a century later in 1976, the Player’s Association was able to finally tear down baseball’s permanent reserve clause—the contract language that essentially bound a player to a single team until he was released or traded—and owners and sportswriters again insisted that the competitive balance of the game was threatened by player greed.
The rhetoric from the baseball establishment did not match the on-field reality. From 1981 to 1993, the first significant era of free agency in the sport’s history, all 12 of the National League’s teams finished first at least once, as did 11 American League teams. From 1994 through 2001, however, there was a pronounced separation in strength between the haves and have-nots, as the local revenue streams of major markets such as New York and Boston overwhelmed the capabilities of small market franchises in such cities as Tampa, Montreal, and Milwaukee. This work examines how the sport has prospered and suffered during the free agency era, based in large part on how the game’s various revenue streams are allocated. It further examines the revenue sharing plan in baseball’s current collective bargaining agreement, identifying flaws that may well undermine its long-term effectiveness. It also explores how the baseball expertise of some organizations has allowed them to flourish despite the lack of revenue.

4. The Globalization of Baseball: Cost Cutting and Outsourcing      120 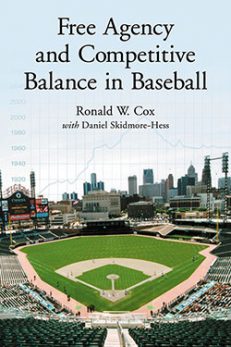 You're viewing: Free Agency and Competitive Balance in Baseball $35.00
Add to cart