View cart “Foreign Language Films and the Oscar” has been added to your cart.

Foreign Language Films and the Oscar

The Academy Awards—that yearly Hollywood bash that brings together the glamour and glitz of the international film industry—is highly revered yet has been minimally explored beyond the category of Best Picture. Over the last decade, more than 2,000 films have been submitted for the title of Best Foreign Language Film. Of those, 312—including Italy’s 8 ½, Sweden’s Through a Glass Darkly and Mexico’s Pan’s Labyrinth, as well as Denmark’s lesser-known Harry and the Butler, Yugoslavia’s I Even Met Happy Gypsies and Nicaragua’s Alsino and the Condor—have received nominations.
This guide lists each nominee—from the first-honored Shoeshine in 1948 through Iran’s second Oscar winner, The Salesman, in 2017—chronologically and includes synopses, basic facts about personnel and production qualities, and rankings among annual competitors that often differ from those of the Academy.

Michael S. Barrett is a former overseas correspondent and magazine editor and author. Since he was 16 attending auteur film houses in Seattle, and later in New York, Brussels, London and Paris, he has amassed a monumental archive of foreign-language films. He lives in Sedro-Woolley, Washington. 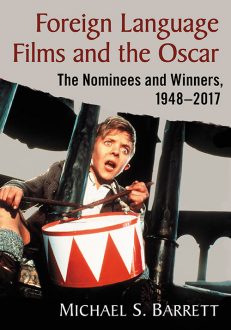 You're viewing: Foreign Language Films and the Oscar $39.95
Add to cart