View cart “Encyclopedia of Television Law Shows” has been added to your cart.

Factual and Fictional Series About Judges, Lawyers and the Courtroom, 1948–2008

When media coverage of courtroom trials came under intense fire in the aftermath of the infamous New Jersey v. Hauptmann lawsuit (a.k.a. the Lindbergh kidnapping case,) a new wave of fictionalized courtroom programming arose to satiate the public’s appetite for legal drama. This book is an alphabetical examination of the nearly 200 shows telecast in the U.S. from 1948 through 2008 involving courtrooms, lawyers and judges, complete with cast and production credits, airdates, detailed synopses and background information. Included are such familiar titles as Perry Mason, Divorce Court, Judge Judy, LA Law, and The Practice, along with such obscure series as They Stand Accused, The Verdict Is Yours Sam Benedict, Trials of O’Brien, and The Law and Mr. Jones. The book includes an introductory overview of law-oriented radio and TV broadcasts from the 1920s to the present, including actual courtroom coverage (or lack of same during those years in which cameras and microphones were forbidden in the courtroom) and historical events within TV’s factual and fictional treatment of the legal system. Also included in the introduction is an analysis of the rise and fall of cable’s Court TV channel.

Hal Erickson has written several media-related books for McFarland, and was for many years a primary editor of the All-Movie Guide website. He lives and works in Milwaukee, Wisconsin. 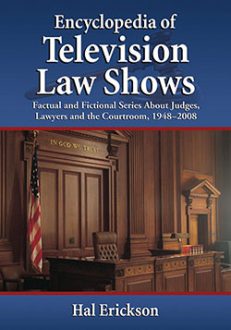 You're viewing: Encyclopedia of Television Law Shows $39.95
Add to cart