View cart “Darkness Visible” has been added to your cart.

The average GI in World War II carried a rifle, had military support, was committed to whatever action his unit was engaged in, and often had time to rest and regroup before advancing. Conversely, the combat photographer had his camera, a sidearm, and a jeep, was sent wherever there was fighting to document what was happening. He often saw the worst of the war.
Charles Eugene Sumners was a still photographer in the 166th Signal Photo Company, and in Darkness Visible he offers his World War II memories—some sad, some happy, many horrendous, all life-changing. With the aid of many of his photographs reproduced in this book, he remembers boot camp, the trip overseas, and events in France, Germany, Belgium, and Luxembourg, including the Battle of the Bulge, while covering Patton’s Third Army’s field artillery, infantrymen, engineers, the 10th Armored and the 6th Armored. Other subjects include Hitler youth, refugees, labor camps, POWs, other combat photographers including his friend Russ Meyer, and going back to Europe after the war.

The late Charles Eugene Sumners earned five Battle Stars and a Bronze Star for his participation in all five major European campaigns in World War II. He lived in Vincent, Alabama.
His sister-in-law, Ann Sumners, works for a magazine and lives in Rome, Georgia.

“interesting…a great collection of photographs…unique…highly recommended”—On Point; “a pleasure to read”—Military Heritage; “the 172 photographs in the book document his war experiences from ‘boot camp’ through all five major European campaigns, including the Battle of the Bulge”—The Newton Record. 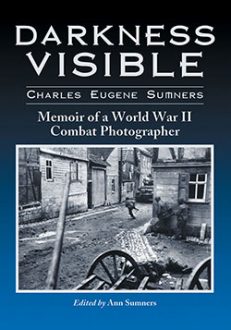