View cart “Baseball’s War Roster” has been added to your cart.

A Biographical Dictionary of Major and Negro League Players Who Served, 1861 to the Present

From the earliest days of baseball, young men who filled team rosters felt compelled to fill the uniforms of America’s armed forces when their country called. This exhaustive volume, arranged chronologically by conflict, then alphabetically by player, records every known former Major League and Negro League player who served in the U. S. military during wartime. Legends like Ty Cobb and Ted Williams appear alongside lesser-known players like pitcher George Zettlein, who served aboard a ship during the Civil War; Baltimore Orioles pitcher Arlington Pond, who fought in the Spanish-American War; and infielder Eddie Grant, who lost his life in battle during World War I. Entries list each player’s position and career statistics and include a short narrative of his military and athletic career.

Brett Kiser is a freelance writer in Marshall, Missouri. 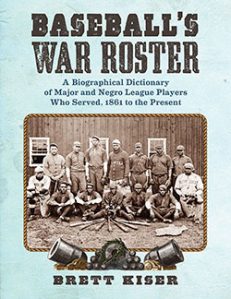