View cart “The Foreign Burial of American War Dead” has been added to your cart.

Normandy, Flanders Field and other overseas cemeteries of the American Battle Monument Commission (ABMC) are well known. However, lesser-known burial sites of American war dead exist all over the world—in Australia and across the Pacific Rim, in Canada and Mexico, Libya and Spain, most of Europe and as far north as the Russian Arctic. This is the history of American soldiers buried abroad since the American Revolution. It traces the evolution of American attitudes and practices about war dead and provides the names and locations of those still buried abroad in non–ABMC locations.

Chris Dickon is an Emmy-awarded former broadcast producer whose work develops new information about the human results of Americans at war. He has written about the places where named American war dead are still buried, the role of Americans in the non-American forces of the two world wars, and the social results of U.S. military racial policy and practice in Europe. He lives in Portsmouth, Virginia.

• “Dickon has been painstakingly counting, cataloging and mapping the locations of American war dead buried outside formal memorial cemeteries”—PBS Newshour 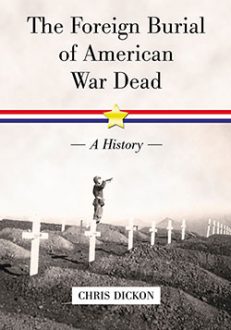 You're viewing: The Foreign Burial of American War Dead $39.95
Add to cart