Authorized Releases and Bootlegs, Including Recordings by Danzig, Samhain and The Undead

A pioneering “horror-punk” band, the Misfits are legends in their own time. This discography tells the story of the band in all of its incarnations through all of their recorded output—both official and unauthorized releases. Discographies are provided for both present and former members’ solo projects and bands, along with a wealth of rare record sleeves, photos and vintage posters documenting the evolution of the band and the brand.

• “This decent-sized 242-page opus is filled to the brim with information on pretty much every release relating to the Misfits and its rather huge musical family that you can possibly think of, and the best part about the book is that the wonderfully geeky yet skilled writer Mr. Cotter guides us through the history of the band from beginning to end too, thereby placing each release in a larger historical context. In other words, there is a red thread running through it all and the author’s own perspectives on all things Misfits as well as his thoughts on each album and single and so on are often hilarious and make for a great read. Actually, the irony and sarcasm that sneaks in quite often is arguably the most charming part of the piece and there were so many phrases and paragraphs that had me in stitches. … I dig Cotter’s creative style of writing as his enthusiasm and passion with respect to the subject matter shines through on every page, which is certainly commendable. …valuable… As a huge fan of the horror punk pioneers, this one came in quite handy for yours truly and it is worth checking out if you are either a serious collector or simply just looking to start collecting a few Misfits items and need a bit of guidance in that department.”—Eternal Terror

• “The Complete Misfits Discography is filled with the compiler’s understanding, good humor, and insight into the band and its unique history. It well deserves the 2020 ARSC Award for Excellence it received for Best Discography in the category of Best Research in Recorded Rock and Popular Music.”—Association for Recorded Sound Collections Journal

Review Fix chats with The Complete Misfits Discography: Authorized Releases and Bootlegs, Including Recordings by Danzig, Samhain and The Undead author Robert Michael “Bobb” Cotter to find out what inspired the book and why the punk band still matters to this day.

Review Fix: What inspired the creation of this book?

Robert Michael “Bobb” Cotter: Well, I suppose the indirect inspiration was a fanzine that I put out (for three issues) in the very early 2000’s called The Misfits Collector. I always had wanted to write an actual book about them, and that was one of the projects I was working on when I had my stroke. I didn’t write another for four years, and in the meantime, somebody else came out with a Misfits biography. I didn’t think it was very good at all; I mean, the author heard and liked “Mother” by Danzig, but he didn’t even know at the time that Glenn had been in a band before that! That just didn’t seem right to me. Plus, the guy really didn’t seem to be into monster/horror movies (I remember what in particular set me off: he referred to Famous Monsters as “the legendary horror-geek magazine”), had never been in a band, and seemed to have never been part of the punk scene in general. Having been in a HC band back in the day, toured, put records out and stuff, isn’t necessarily a prerequisite to writing a book, but I feel it gives me (or anyone) a different perspective and an understanding of things like touring, recording, promotion, doing graphics for flyers and shows, writing lyrics and taking care of business.

Anyway, so I thought I could do a much better job, but our overlords balked at the idea, saying that since there was already a bio out there, another one would be redundant – but they did think it was a viable commercial option, so McFarland asked if I couldn’t find another angle. And there was a part in the bio that said that listing all the Misfits’ bootlegs would take a whole book in itself, and so that was what I pitched to McFarland. They said that was a great idea, but they couldn’t do a book just on bootlegs, that I would have to do their legit releases too and make it a discography. Hey, no problem! Of course, I’ve never written a discography before, but that was part of the fun.

Review Fix: What makes The Misfits worthy of a book in your opinion?

Cotter: Quite simply put, they are one of the greatest Punk Rock bands of all time; obviously my favorite.

Cotter: I’m tempted to say “the original,” but since they went through guitarists and drummers at a rate only slightly behind Spinal Tap, I’ll just go with any of the lineups that played with Glenn. Googy was my favorite drummer.

Cotter: Oh geez… I love ’em all! But if pinned down, I would probably say “Vampira.” Top Three would probably be that, “Horror Business,” and “Astro Zombies.”

Cotter: Painful. No, seriously, when I started, I was in relatively good health, but then I got my fourth hernia and had to have it operated on very close to my deadline. As soon as I came back from the hospital, I was back at work! But I’ve never missed a deadline, and I didn’t intend to let that stop me.

Review Fix: What did you learn through the writing process that you weren’t expecting?

Cotter: Um, to make a million bucks in royalties so that I can retire comfortably. Seriously, tho, I’d just like it to be remembered as a definitive Misfits book.

Cotter: Probably the retirement I alluded to in the previous answer. I’ve got health problems and the doctors haven’t been able to figure out what it is yet, so if not actual retirement yet, at least a break for a while. But, if this is my last one, it’s a good one to go out on, a true labor of love. I’ve had a good run, and am satisfied with my legacy. 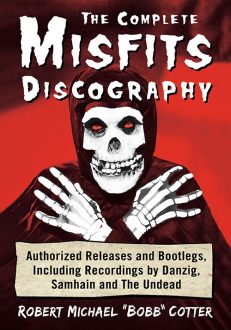 You're viewing: The Complete Misfits Discography $39.95
Add to cart