The Story of Baseball’s Most Memorable Collapse

In 1964, thousands of Philadelphia baseball fans were caught up in the Phillies’ unexpected run at the National League pennant. Nearly a decade of continuous defeat had earned them little more than the reputation for an unprecedented record of consecutive losses. But in that ’64 season the Phillies shocked the baseball world, taking over the National League in mid–July and holding on to first place for 73 consecutive days. And then, as the team’s first pennant in a generation seemed within reach, the Phillies collapsed in the greatest meltdown in baseball history.
This account traces the rise and fall of that year’s Phillies team and attempts to disentangle the complex issues that ultimately cost them the pennant. The book sheds light on the influential events of the fifties and sixties that rendered the team first futile and then undefeated, beginning with an exploration of Philadelphia itself and its team in the 1950s. Early chapters discuss the acquisition of a new manager (Gene Mauch) and the dramatic additions of a dynamic new pitcher (Jim Bunning) and the first great African American player produced by the farm system (Richie Allen). Following chapters focus specifically on the 1964 season and its critical moments, from Jim Bunning’s perfect game and Johnny Callison’s winning home run in the All-Star game, to Chico Ruiz’s steal of home that began the devastating 10-game losing streak at the end of the season. Final chapters analyze what went wrong during the season and discuss the Phillies’ position in baseball today. Three useful appendices provide the statistics for the games of the ’64 season and for the individual players on the team, and detailed statistics for the 10-game losing streak.

Philadelphia’s John P. Rossi, professor of history, LaSalle University, has written on baseball history for The International Journal of the History of Sport and The Phillies Report and periodically teaches a course on the relationship between baseball and American history. He is also the author of A Whole New Game: Off the Field Changes in Baseball, 1946–1960 (1999) and The National Game: Baseball and American Culture (2000).

“A professional historian, the author does a commendable job in gathering information from local newspapers, popular magazines, team histories, and baseball texts. Overall, the text is written well and is an easy read. Authors seldom write about failure, but failure in sport as in life is indeed a reality. In writing about the collapse of 1964 Phillies, Rossi provides the reader with a real dose of life”—Journal of Sport History; “solid”—Northeast News Gleaner. 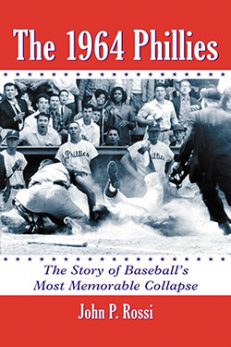