Mixed Martial Arts and the Quest for Legitimacy

The Sport vs. Spectacle Divide

Mixed martial arts or MMA is widely regarded as the fastest growing sport. Events fill stadiums around the world and draw vast television audiences, earning strong revenue through pay-per-view at a time when other sports have abandoned it. In 2016, the Ultimate Fighting Championship was bought by the massive talent agency WME-IMG for $4 billion. Despite this success, much of the public remains uneasy with the sport, which critics have denounced as “human cockfighting.” Through an exploration of violence, class, gender, race and nationalism, the author finds that MMA is both an expression of the positive values of martial arts and a spectacle defined by narcissism, hate and patriarchy. The long-term success of MMA will depend on the ability of promoters and athletes to resist indulging in spectacle at the expense of sport.

Mark S. Williams is a professor of political studies at Vancouver Island University in British Columbia.

Review Fix chats with Mixed Martial Arts and the Quest for Legitimacy: The Sport vs. Spectacle Divide author Mark S. Williams, who lets us know what inspired the book and why MMA matters.

Review Fix: How did this project start for you?

Mark S. Williams: I started to watch mixed martial arts (MMA) in early 2005 while I was a graduate student. The first season of the reality show/gameshow “The Ultimate Fighter” (known as TUF 1) was on Spike TV at the time and it featured a lot of talented fighters, including one guy who went on to be a UFC champion and many who would establish themselves as contenders. That particular season also showed us that the guys competing in MMA varied quite considerably in their backgrounds and personalities. There were quite a few thuggish goons on that season, which is kind of what an outsider might expect to see in MMA, but also other guys who had sympathetic stories, at least one odd goofball, and some shockingly normal guys. The funny thing is that it was actually my girlfriend, Linda, who first turned on TUF 1 out of a morbid curiosity on her part. This was back when we first started dating and Linda and I are still together 14 years later. Linda has a paper-thin tolerance of MMA, and I always like to joke with family and mutual friends that she was the person who got me into it when they ask me, much to Linda’s embarrassment.

This was a time when MMA experienced significant growth beyond a shadowy fringe and into the mainstream. This growth reached a culmination of sorts with the UFC’s move from Spike TV, which was a channel that seemed desperate to appeal to 14-30 year-old males exclusively, to Fox. I certainly think that the sale of the UFC to Endeavour a few years later, and the more recent ESPN deal, are both representative of MMA’s arrival in the mainstream, but it was the Fox deal where MMA first seemed to come out of the shadows and into the spotlight.

The narrative that the UFC, and many in the media, were trying to promote is that MMA is a ‘sport’. Dana White, the long-time fiery president, used to tell everyone who would listen that the UFC was going to become bigger than other sport globally, even bigger than soccer. I never fully accepted this narrative of MMA as a sport though.

The position that I take in my book is that MMA is as much spectacle as it is sport, and is at risk of being overwhelmed by the spectacle of promotion. At times, the UFC promotes a product that is less a sport than it is spectacle. Worthy title challengers are passed over in favor of fighters who are seen as more marketable, and elite fighters who rely upon defensive fighting techniques are often cut from the UFC after a two-fight losing streak or less. Dana White likes to say that he is interested in fighters who “move the needle,” “hungry animals,” and “killers.” This means fighters who are reckless in their style, often forgoing technical fighting and instead getting into brawls, but also fighters who take “trash-talking” to unprecedented levels of insult and obscenity. For instance, both Chael Sonnen and Conor McGregor rose to unbelievable success for the classless way they would promote their fights. They both faced Brazilian champions and they both mocked Brazil’s poverty to the cheers of American audiences, the UFC, and members of the MMA media. Could you imagine a Penguins-Capitals Eastern conference finals in the NHL where Sydney Crosby mocks poverty and corruption in Russia in order to get under Alexander Ovechkin’s skin and to promote the series to drive up ratings? No way. Crosby would get fined by the league and he would lose the respect of most hockey fans. MMA is characterized by the spectacle of its promotion on nationalist grounds, and as I explore in the book, it also promotes itself on sexist and misogynistic grounds. Sometimes it is just a general anger or hatefulness that materializes in the promotion of the sport. Just recently a welterweight won a decision in a main event against a former champion and made a disgraceful joke in his post-fight interview about a retired hall-of-famer who was hit by a train and in a coma for a month.

Review Fix: Any challenges during the writing process?

Williams: The biggest challenge I experienced with this book is that I had to come out of my disciplinary training in Political Science to write from a more sociological and cultural perspective. My first book was on the foreign economic relations of Indonesia and I’ve also written on subjects such as Canada’s relations with the Association of Southeast Asian Nations (ASEAN). MMA was a pretty big departure from the realm of public policy and government! I was able to include some public policy in the book on MMA, such as where I problematize the UFC’s claim that their fighters are “contractors” by looking at US tax law, and with the debate in the US House of Representatives to extend the Ali Act to MMA, but most of the book is an exploration of sport (and spectacle) and society.

Though it was a challenge to come out of my disciplinary “silo,” it also proved to be quite a refreshing experience to write on issues that differed so greatly from the traditional subjects of my research and teaching.

Williams: Martial arts is the great equalizer in personal defense. Through discipline, hard-work, and technical mastery, a smaller person can mount a defense against an aggressor. I think that this is a type of justice. You can learn to minimize harm done to you against those who seek to do injustice to you. MMA, especially in the early years, was a proving ground of the various martial arts to see which discipline was actually the most practical and therefore the one that would serve you best in personal defense. Of course, the real answer is that you should study multiple disciplines to be effective at protecting yourself, but that’s one of the reasons why you have MMA-based gyms in addition to your traditional single-discipline gyms.

Review Fix: How do you think it has changed Pop Culture?

Williams: MMA has made it to the big-time. It is on ESPN, and gets coverage in both sports media outlets as well as even in general news outlets at times. Despite the arrival of MMA to the big-time, the UFC’s reliance on spectacle shows that management has a lot of insecurities about the fan-base and the popularity of the sport. The irony of this insecurity is that the UFC pulls MMA into greater spectacle to appeal to larger numbers, but this spectacle has the effect of harming the credibility of MMA as sport.

I think that scripted hand-to-hand fighting on television and in movies is starting to look more authentic due to the role of MMA fighters serving as advisors on set or even getting into stunt acting. Hollywood isn’t always going for realism, especially with so many shows and movies featuring super-powered characters, but now you regularly see rear-naked chokes and arm-bars in fight scenes that are going for realism. There’s actually a great fight scene in the first season of Daredevil on Netflix, a hero that is closer to being physically human rather than superpowered like Superman or Thor, and as the fight goes on, Daredevil is not just fighting his opponents but also himself as his endurance begins to fade and he collapses in a state of exhaustion. Fighting is tiring, watch just about any MMA fight that goes past one round to see this, and I think you are seeing this being acknowledged more in Hollywood productions.

Review Fix: What’s your background like? How have Martial Arts affected your life?

Williams: This book is very much from the perspective of an outsider to MMA, and martial arts more broadly. I joined the jiu-jitsu club at McMaster University, the school in Canada where I completed my PhD, and its Muay Thai kick-boxing club, but those clubs were more about learning fundamentals than they were about progressing in the discipline in any meaningful way.

Williams: The argument that I present in the book is that MMA, like any mainstream sport, should have some measure of spectacle to it, but MMA has embraced too much spectacle at times and this undermines its credibility. The spectacle of MMA makes the experience of watching it and following it feel more comparable to professional wrestling (WWE scripted wrestling) rather than sports like hockey or football, only somehow much worse than WWE because the violence is real.

I present an argument in the book, and I personally don’t want to see MMA overwhelmed by spectacle, but I’m not an ideological kind of person who thinks that I possess some sort of dogmatic truth to educate and enlighten the reader. I understand that people have their own pre-existing views on MMA, whether they are fans or not, and so I am hoping that the book engages with the reader and helps them to figure out why they have the impressions they do have on MMA.

Williams: Right now I’m editing a textbook on the politics of the Asia-Pacific. In addition to traditional chapters written by various experts on the politics of the region, the book is also going to include active learning sequences that I’m co-writing with others. These active learning sequences will have students participate in simulations of conferences, such as an emergency session of the United Nations Security Council on escalation in North Korea, a women’s movement conference for the region, and others.

I’ve also been working on a study of the public-policy dimension of the video game development industry in British Columbia. I’m hoping to expand this into a national study of Canada soon.

My plan is to return to writing on MMA again soon. This book with McFarland has helped me to meet a number of really interesting people who are involved in MMA in some capacity and I’m hoping to edit a collection of essays written by scholars, commentators, and practitioners in the near future. 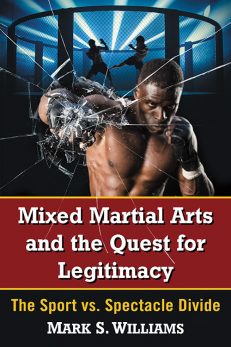 You're viewing: Mixed Martial Arts and the Quest for Legitimacy $35.00
Add to cart