View cart “Architect of Death at Auschwitz” has been added to your cart.

Architect of Death at Auschwitz

A Biography of Rudolf Höss

Rudolf Höss has been called the greatest mass murderer in history. As the longest-serving commandant of Auschwitz, he supervised the killing of more than 1.1 million people. Unlike many of his Nazi colleagues who denied either knowing about or participating in the Holocaust, Höss remorselessly admitted, both at the Nuremberg war crimes trial and in his memoirs, that he sent hundreds of thousands of Jews to their deaths in the gas chambers, frankly describing the killing process. His “innovations” included the use of hydrogen cyanide (derived from the pesticide Zyklon B) in the camp’s gas chambers. Höss lent his name to the 1944 operation that gassed 430,000 Hungarian Jews in 56 days, exceeding the capacity of the Auschwitz’s crematoria.
This biography follows Höss throughout his life, from his childhood through his Nazi command and eventual reckoning at Nuremberg. Using historical records and Höss’ autobiography, it explores the life and mind of one of history’s most notorious and sadistic individuals.

John W. Primomo is a retired United States Magistrate Judge for the Western District of Texas in San Antonio. 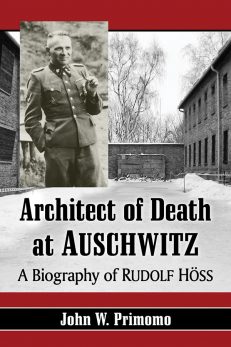 You're viewing: Architect of Death at Auschwitz $39.95
Add to cart